Monday: Another glorious day, but alas, time to leave.
I have seen too many motorways, so I decide to take the A roads. After all, it is almost a horizontal line from Ifield to Tenterden. 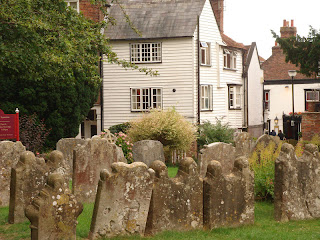 churchyard around St. Mildred's Church Tenterden
And I love these narrow, winding roads, with unexpected turns and dips, so I hope to enjoy the drive. However, the going is rather tortuous. I get lost twice driving through East-Grinstead which seems to have spread since I last went there, and in Tunbridge Wells, which is very busy indeed. Although I hate using a satnav, I use it twice to get me on the right track again. And as for a leisurely drive enjoying the countryside, traffic on these roads seems to have multiplied too and the speed on these roads amazes me. Besides, there are road works in Tunbridge Wells which doesn't help. I am trapped when I read Long Delays. There is no alternative route here. In the end it takes me over two hours to drive just 77 kilometres. But I have seen more than if I had taken the motorway, which is a much longer but also a far faster route. 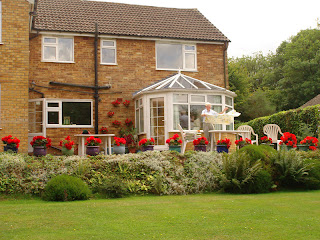 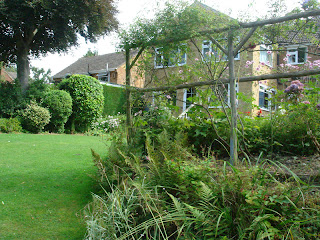 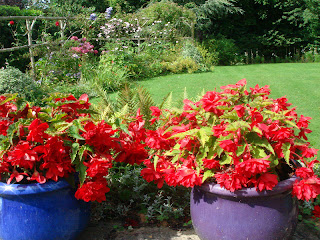 At least I am in plenty of time for a lunch with friends in Tenterden, enjoyed again al fresco, in another lovely and not so small garden. The best thing of course is literally breaking bread with friends. And after lunch I still have time to spare to go into Tenterden and do some last supermarket shopping for the things I can't get in the Netherlands.

Another drive along country lanes, this time on B roads, towards Dover, a distance of some 55 kilometres. What never happened to me before happens now: the ferry, a late one already, is 1,5 hours late due to fog and technical problems, which means that we see a beautiful sunset just before sailing into Calais. By the time we disembark and I can hit the road it is 21.30 and getting dark, and I have some 350 kilometres to go. One advantage is that there is not so much heavy traffic like lorries and trucks. The disadvantage is that all the restaurants along the motorway curiously enough close around 22.00 hours. So apples, a bottle of water and a package of cashew nuts help me survive and still any hunger pangs. 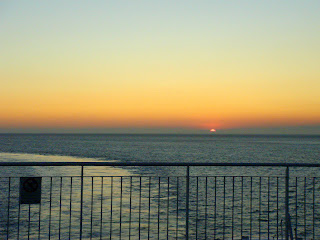 Home around one o'clock, and already longing to return to the English countryside. At least the noise of planes landing and taking off, reminds me of Ifield under the smoke of Gatwick Airport.
Posted by Witweg at 22:08